Young Producers is a new project for young people who have taken part in Making Tracks, supported by the Arts Patron Trust. Our first 2 Young Producers Helen and Johnny are collaborating to put on a gig involving other young people and will be blogging about the process.

The ‘Super Band’ was reunited today.

We started off knowing that Johnny wanted to move away from the guitar and  bass, and be up front, doing vocals, but didn’t have the baseline for the song.

Johnny wanted us all to be involved in the process of writing the song, so we started off by Gary playing some different genres of music, and us all voting on which one we felt was best suited to ourselves, Johnny, and to the event.

Eventually, we decided on a blues genre song, and then had to decide whether to have it in a major key, or a minor key; of which Gary played both, and we decided on the Minor key one.

Whilst the rest of the band were working out the musical accompaniment; Fudge, Johnny and I worked on the lyrics. 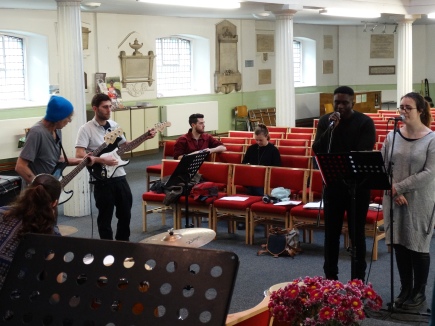 The beauty of a blues song, is that you can sing about almost anything, and it will still sound amazing, but we decided to keep on the theme of music, and wrote a chorus.

We then wrote a verse for Fudge, in which we added some elements of the chorus.

I was trying to harmonise, but was finding it really difficult, as I’ve never harmonised before, and it was a bit daunting because Fudge has such an amazing voice, and totally kept to the melody, whilst I went off track a bit.

It was challenging, but I persevered.

This site uses Akismet to reduce spam. Learn how your comment data is processed.