It’s the third session of Young Producers and our workload is increasing steadily. we made our way to the Southbank Centre to watch the Royal Philharmonic Orchestra perform. We arrived at about 4pm and the performance was due to begin at 7:30pm so we had about three hours to work on our event. Lauren, Louisa and I had a discussion about what our social media strategy would be. I came up with suggestions of pictures we could take around the Southbank building to post on our social media seeing as we were close to landmarks like the London Eye and the Royal Festival Hall. 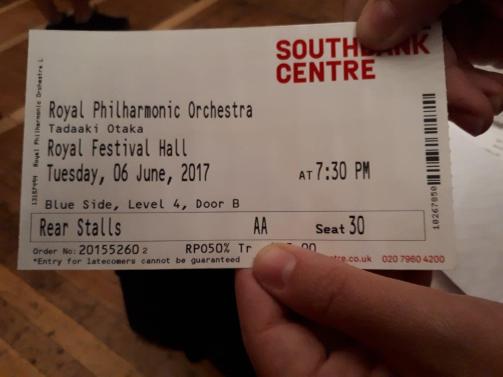 Later, we had a call from Jake telling us that he had organised for us to speak to Sally – one of the members of the orchestra. My role was to come up with questions to ask her. We then recorded some Instagram videos and vines, we ran into a bit of a problem because it started to rain so we decided to take pictures of the performance area instead.

The performance started on time, the setup was amazing with all the instruments. The performance was conducted by Japanese conductor Tadaaki Otaka. We listened to the works of Elgar, Tchaikovsky and Walton. The orchestra sounded incredible and it was inspiring to watch a large number of people playing together as a unit. The level of team work involved really showed and seeing the orchestra play gave me some extra motivation to make sure that our event is just as good.

This site uses Akismet to reduce spam. Learn how your comment data is processed.